skip to main | skip to sidebar

Touched By The Hands of The Famous 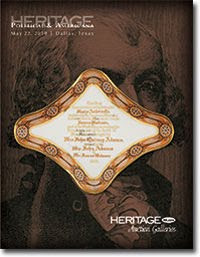 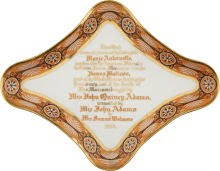 Heritage Auctions will be auctioning off a special piece in their upcoming May 3rd auction. This beautiful and unusual shaped piece from the china of President James Madison has a handpainted inscription indicating the piece's provenance. From Marie Antoinette to James Monroe to the Madison's....this piece was touched by more than a few famous hands. I have published a copy of the auction house's listing text below.
Bidding is to open at $20,000.
Here's a link to the listing in case you'd like to bid:

http://historical.ha.com/common/view_item.php?SaleNo=6035&LotIdNo=46001&txtSearch=monroe&hdnSearch=true
Originally owned by Marie Antoinette.
James Madison: Perhaps the Most Provenanced Piece of White House China Ever Offered on the Auction Market. This beautiful Paris porcelain pattern is a familiar one to students of White House China. The service was purchased for Madison by James Monroe while he served in Paris as the American Ambassador. Several sources confirm that the original owner was the deposed French Queen Marie Antoinette. The china was originally used by Madison at his Virginia home, Montpelier. But it was brought to Washington in the last years of his presidency, when the White House was being refurbished after being burned by the British in 1814. Nothing seems to have been documented as to the history of this china following Madison's White House years. However, the 1853-dated inscription on the present example states that it was purchased by the wife of yet another American president, John Quincy Adams, upon the death of Dolley Madison. Mrs. Adams subsequently presented it to Mrs. Samuel Wetmore, a prominent New England matron. So here we have a serving dish owned in turn by the famous French queen and three of America's first six presidents!
The inscription appears to be slightly inaccurate, although this is understandable: when it was applied in 1853, both Mrs. Adams and Mrs. Wetmore were deceased, so the story undoubtedly had morphed a little in the telling. Mrs. Adams could not have purchased this piece after Dolly Madison's death, since Mrs. Wetmore predeceased Dolley by several months in 1849. It seems much more likely that the china was sold by the Madisons earlier, as financial difficulties had necessitated the sale of many household furnishings and valuable personal effects. Quite aside from its presidential associations, a fine Paris porcelain set of this quality would have been a valuable asset, probably too much so for Dolley to have been able to retain it till the end. It is more likely that Mrs. Adams obtained this piece directly or from a third party earlier.
We cannot resist the temptation to speculate that Mrs. Adams may have felt a certain smug satisfaction in the acquisition. She might well have first been exposed to the china at White House state dinners between 1815 and 1817, when her husband served as the American Ambassador to Great Britain. John Quincy Adams went on to serve a single term as president from 1825 to 1829, but was defeated for reelection by Andrew Jackson in a bitter campaign. Jackson was, of course, the candidate of Madison's Democrat Party, in whose affairs Madison continued to play an active role at that time. It may have given Mrs. Adams a sense of justice served when Dolley Madison's prized china ultimately came to her.
The present example, an unusual 12" diamond shaped serving dish, has been in the family of the consignor for generations, although there is no record of a connection to the Wetmore family. The consignor's elderly mother remembers it being housed in the same display case which presently accompanies it when she was a little girl, and it was then in the possession of her grandfather (please see this lot listing on our website for additional images). Fears founded in its fragile nature have motivated the family to seek an appropriate new custodian for this historic heirloom.
It is in beautiful condition. A similar, but less provenance, example was sold by Heritage in the March 1, 2008 auction of the Edward C. Gillette Collection, where it fetched nearly $18,000. Because of its unique character we will not set an estimate on this specimen, but will merely open the bidding at $20,000. This lot requires 3rd party shipping.
Posted by Us at 7:00 PM

The Heritage of America.
Preserved in Porcelain.